Can You Receive What Is Given?

Receiving is vulnerable. It feels out of control. And it can be terrifying.

In my article, Facing the Fear of Receiving, I talked about the fear of receiving and how letting life happen is the deepest form of receiving.

Well, life happened to me last week, and the story of what happened powerfully illustrates the struggle—in this case my struggle—to receive. It also illustrates how subtle receiving can be, and how you may have blindspots around receiving.

At this moment, I am going through a titanic transition and transformation in my personal life.

I look forward to sharing more in the near future, and for now it must remain my private and sacred information (#boundaries :-)). As a therapist I once worked for often said after sessions, “more will be revealed . . .”

The Wednesday before last I had two meetings back-to-back. They were in-person meetings (not on Zoom), and I had to travel to two different offices for these meetings.

It was a busy day with very little space or free time between appointments, so I decided to take a snack with me so that I would have something to eat between the two meetings. I also took a napkin with me, just in case I needed one.

After I left the second meeting and was walking to the parking lot to get back in my car, I spotted the chartreuse napkin I had brought with me lying on the ground right next to the driver’s side door of the car. Apparently, the napkin was in my lap when I got out of the car, and when I got out it fell on the ground.

I bent down to pick up the napkin and as soon as I removed it from the pavement, I saw a bright metal object underneath it.

As I focused in on this shiny spot, I could see it was a small keychain with a pendant on it.

Although I wasn’t raised in the Catholic church or in a Catholic family, I had seen enough religious iconography to know that the pendant was Archangel Michael (you can see the actual piece in the photo below).

I was awed by this powerful symbol commanding my attention—as if I had been intentionally directed to it. I immediately picked it up and put it on the driver’s seat of my car so that I could take a photo of it.

It never entered my mind to take it.

An ingrained, familiar, and double-edged feature of my nature is to think of others, and my first thought was about the person who had apparently lost this piece.

I imagined that he/she might be distressed about losing it.

Thinking that the person who lost it might come back to find it, I placed it on a little curb in the parking lot right in front of the parking space. I was worried that someone might run over it if I left it where I found it, and I wanted to protect it.

I was satisfied by the thought that I had a photo to share, to tell the story about how Archangel Michael came to me in such an unexpected way.

A few days later, I had my weekly session with a spiritual mentor I’ve been working with for almost a year. Of course, I told him the story.

The first thing he said to me was something like, “You took it, right?”

As I said, it never entered my mind.

I love that I have a compassionate nature and that it is part of who I am to think of others, and not just myself.

But in this instance—especially given all that is happening in my life at the moment—I had to ask, “Why didn’t I take it?”

In other words, why did I not receive what was so blatantly given? The answer isn’t simple, but it is a universal story.

Most women, despite being physiologically and biologically designed to receive for the actual continuation of the human species, prioritize giving over receiving.

Most of us would rather host an elaborate 6-course meal that took us a week to prepare (without any help), than to sit silently while graciously allowing ourselves to be honored and celebrated with a simple “Happy Birthday to You” song.

Something is seriously wrong with this picture.

But the question of why I didn’t take the pendant wasn’t the end of the story.

As I was talking to my mentor, I thought, “maybe I’ll go back and see if it’s still there.”

I reasoned that if it was still there, then it was meant for me. Plus, I would feel better about taking it because it had now been 2 days, and the person who lost it had had some time to come back for it.

So, that same night around dusk I took the trip back to the parking lot where Archangel Michael appeared. I got out of my car and walked up and down the curb where I had placed it . . . .

And it was still there!

I was delighted. I was finally able to accept that this powerful symbol of protection was meant for me. 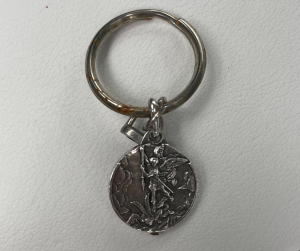 I share this story with you because my wish is that it might awaken in you the ways in which you are right now blocking the flow of receiving.

I’ve heard so many stories from women who’ve literally been starving for acknowledgment from their spouse (for example), but when he told her she was beautiful or that she was a fabulous mother, she blew it off with a quick, “Oh, he’s just saying that.”

Blocking the flow of receiving when you’re longing to be seen is like going without food and water for several days and when you’re finally offered something to eat or drink you refuse the food because you don’t think the person who offered it to you has the “right attitude.”

We must ask ourselves:

What are you receiving right now that you want to let in?

This one choice can change everything for you.

Before I go, I want you to know about a brand new opportunity to join me twice a month LIVE on Zoom!

You’ll have an opportunity ask me anything and get laser (brief) coaching about any topic you’re struggling with around returning to your authentic self, reclaiming what is yours, and receiving everything that is meant for you.

Subscribe to get the latest Radiant Threefold Path posts in your inbox.